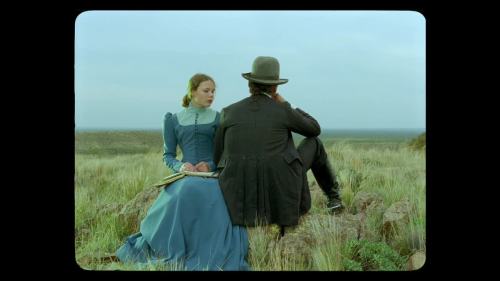 The Argentinian director Lisandro Alonso has developed a reputation for festival films in the ‘slow cinema’ mode. This means that his films are shown by leading festivals but struggle to get cinema releases in many territories. Jauja (his fifth feature) is a slightly different proposition since it stars the internationally-known Hollywood actor Viggo Mortensen (who is also credited as one of the producers and the music composer on the film). Perhaps because of this, Alonso has managed to attract funding and support from many sources including the US, Mexico, Brazil, France, Germany and the Netherlands. The film won the FIPRESCI critics prize at Cannes and two other international awards and certainly in the UK it has had a higher profile on release than the director’s earlier films.

Mortensen plays Captain Dinesen, a Danish military engineer in the late 19th century who is assisting the Argentinian Army in their genocidal campaign to survey and ‘clear’ the ‘jungle’ – the desolate area in Patagonia sparsely populated by indigenous peoples. (The English word ‘jungle’ has connotations of tropical rainforest but its original Sanskrit/Hindi meaning is ‘arid wasteland’ – precisely describing parts of Patagonia.) He has with him his teenage daughter. It isn’t explained why she is there and her presence is disturbing for some of the soldiers. Almost inevitably she starts a relationship with one of them and the couple then run away from the camp. Forced to go looking for them, Mortensen’s character makes his own journey into the unknown.

‘Jauja’ refers to a magical place and at the beginning of the film a title explains this. In colonial ‘Latin America’ it became associated with similar concepts such as ‘El Dorado’. In this instance it seems to me that it refers to what might be termed the fantasy at the heart of the colonial melodrama. In some ways this film reminded me of Tabu, the Portuguese film which so captivated me in 2012. The two films aren’t necessarily the same in style, but there are some parallels about colonialism and both employ a time shift so we see characters in the present with links to the colonial past. In Jauja the link is not really explained but Viilbjørk Malling Agger, who plays Dinesen’s daughter, also plays a young woman in a country house in modern Denmark. Without spoiling the ‘plot’, I’ll simply note here that the Captain’s search for his daughter takes him to some odd places and some strange experiences. There are two linking motifs between the two time periods – a dog and a toy soldier. 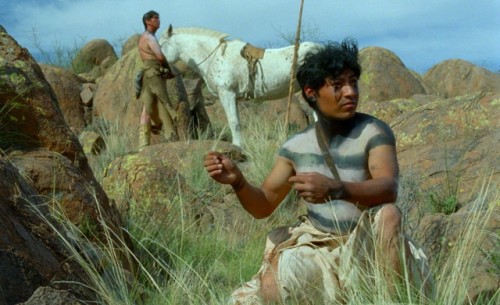 The colonial ‘other’ – the indigenous people who live in the ‘jungle’ 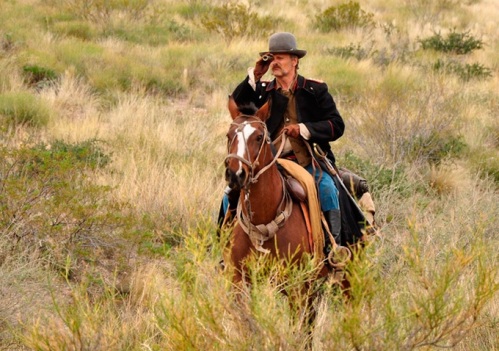 Captain Dinesen in Fordian mode searching for his daughter

The search for a daughter (common I understand to several of Alonso’s stories) in the context of a ‘hostile territory’ in the 19th century brings to mind John Ford’s The Searchers (1956) in which John Wayne plays a Civil War veteran searching for his niece presumed abducted by Comanche raiders. Alonso selected the Finnish cinematographer Timo Salminen (best known for his work with Aki Kaurismäki) to shoot Jauja and Salminen is quoted as seeking a John Ford look for this quasi-Western. He appears to have come across the idea of an Academy (1.33:1) frame with rounded edges during post production and then imposed it on the 1.85:1 footage. The effect works particularly well because of the deep-focus compositions which stretch the gaze into the far distance – proving that barren spaces can be captured in depth as well as in the breadth of a CinemaScope image (see the article and interview with Mortensen by Mar Diestro-Dópido in Sight and Sound May 2015 plus the review of the film by Adrian Martin for more detail on this). The Academy framings also act as a reminder of Kelly Reichardt’s feminist revisionist Western Meek’s Cutoff (US 2010).

I enjoyed Jauja and I found the various aesthetic devices and ideas about the colonial (mis)adventure both interesting and stimulating. I think the Danish connection came about because of the multilingual Mortensen’s interest in the script. Alonso and his co-writer Fabian Casas welcomed a different ‘voice’/language that would be ‘strange’ in an Argentinian film (i.e. not Spanish/French/Italian or English). The colonial past of Denmark is not so widely known as that of other European nations but it is an important element in Danish culture. Besides Greenland, the Faroes and Iceland, Denmark also possessed widely scattered small territories in the Caribbean and India and participated in the slave trade. Dinesen stands in for the European colonial adventurer while the Argentinians themselves are like the ‘settlers’ in North America and Australia who set out to eradicate indigenous peoples. The Argentinian Army officer in the film refers to ‘coconut heads’ – a made up name that Alonso thought would be strange but “not offensive” (see the interview in Sight and Sound). It sounds pretty offensive to me and I suspect to many others. Perhaps as the Luis Suarez racism charge suggests, these issues are rather differently dealt with in the Southern part of South America (i.e. Argentina, Chile, Uruguay)?

So, what does the wider release mean for this ‘slow cinema’ film? I suspect that there has been a fair amount of bewilderment amongst the more mainstream arthouse audience. For my part I enjoyed the chance to gaze on the tableaux set up by Alonso and Salminen and to use the time to think about some of the issues. But I was aware that at the end of a long working day I was prone to losing concentration and potentially falling asleep. On the other hand, a big screen in a darkened cinema auditorium is also far more likely to hold my attention over the whole film than a small screen in my living room – when it is so easy to pause or switch off a DVD. Festival films are meant to be seen in cinemas, even if many critics now watch them on much smaller screens. I also have Alonso’s Liverpool (2008) on disc – I wonder how that will work out?