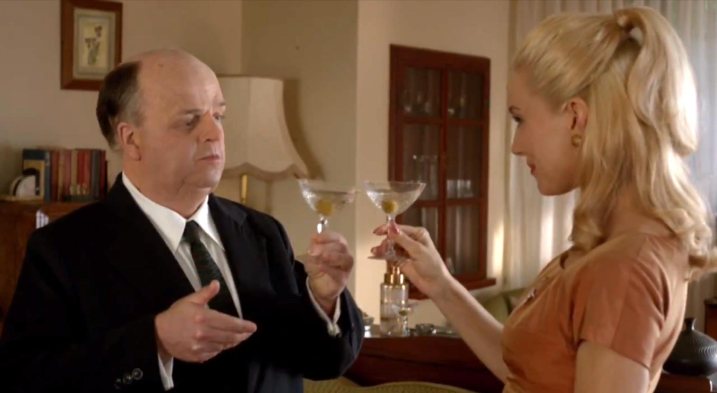 The first of the two recent Hitchcock films was broadcast on BBC2 on Boxing Day. Produced for HBO, The Girl focuses on the difficult relationship between Alfred Hitchcock and his new blonde star Tippi Hedren during the production of The Birds and Marnie during 1961-3. (The second film, Hitchcock, is released in the UK in February 2013 and deals with the making of Psycho in 1959.)

‘The Girl’ was the name Hitchcock (played in this case by Toby Jones) and his wife Alma (Imelda Staunton) gave to Tippi Hedren (Sienna Miller). The script is by Gwyneth Hughes (an experienced UK TV writer) who drew on a book by Donald Spoto (Spellbound by Beauty: Alfred Hitchcock and his Leading Ladies) which in turn refers to interviews given by Hedren herself. Hitchcock, a notorious prankster with a history of sexual repression, has been accused of ‘controlling’ Hedren and forcing her into situations in which he abused her with acts of psychological cruelty, sexual suggestion and possibly direct sexual assault. He had been married to Alma since 1926 and she is presented as partly complicit in casting Hedren, a former model with no previous feature roles, as ‘our girl’. Later in the narrative it is suggested that Alma was upset by her husband’s obsession with his star.

Tippi Hedren and Alfred Hitchcock in on the set of ‘Marnie’ (note that Hitchcock was slightly taller than Hedren, whereas Toby Jones is shorter than Sienna Miller) (Image from the Ronald Grant Archive)

The lead performances in the film are fine but the actors face the problem that Hitchcock and Hedren were well-known public figures. Hitchcock is arguably the most famous film director of all time because he was visible on his TV show in the 1950s and also as promoter of his own films. Tippi Hedren starred in the two films, attracting both positive and negative responses. Despite excellent mimicry of Hitchcock’s vocal style and walk and the aid of prosthetics, Toby Jones doesn’t resemble the director and Sienna Miller doesn’t really try to become Tippi. (Miller is not unlike Hedren in appearance but her voice is quite different and she doesn’t have the same brittle quality that Hedren showed in her performances.) This is not a criticism of either actor, just a recognition of the difficulty of playing a ‘real person’ who is so well-known. The most successful biopics are often those where the actor strives to represent the personality more than the physical resemblance. For me the casting decisions on The Girl had a fatal impact on the representation of the relationship. I was already disturbed by the claims deriving from Spoto’s work. Hitchcock was clearly a man with an unusual personal history and his treatment of Hedren was almost certainly reprehensible. But Hitch and Alma are both dead while Tippi Hedren is still able to comment. She has confirmed the abusive behaviour in general terms but hasn’t herself given the details that form the central part of the film narrative’s appeal to some audiences. As a consequence, there is a form of audience frustration fuelled by the fact that Hitchcock fans are prone to see Hedren’s comments as a form of ‘payback’/revenge. Hitchcock kept Hedren to her contract after she refused to work on his next picture after Marnie. The comments on IMDB about The Girl seem to be mainly rage about Hitchcock’s behaviour or attacks on Hedren as a ‘bad actress’ who deserved to have her career ruined. (The script doesn’t properly explain the way the industry worked in the early 1960s but Hedren

I think that there are at least two other stories covering the same events which could have been presented. The first would be the story about how Hitchcock produced great performances from an actor with limited experience. We do get to see a scene in The Girl which is illuminating. Hitchcock is shown demonstrating to Hedren how to lower her voice and how to do as little as possible in order to create the meaning that he wants. Director Julian Jarrold constructs this scene very well and it is convincing. But there isn’t enough material like this and the film fails to explain the film production process for the lay audience. The second possible story is the long marriage (in 1962 of 36 years) of ‘Alfie’ and Alma. Again there is a scene in which Alma joins Hitch in a screening room to watch rushes but it is never properly explained that Alma was herself a film editor and scriptwriter (as ‘Alma Reville’) who had her own career before she devoted herself to supporting her husband and his work. By the 1960s she was no longer credited but it was still the case that Hitchcock sought her approval on every major artistic decision. Alma knew about his methods and how he treated actors. I’d have preferred a story about what went on between the couple during their work with Tippi Hedren – focusing on the work as much as the troubled relationship with Hedren.

Although I wouldn’t call myself a Hitchcock fan as such, I have seen most of his films – and Marnie is possibly my favourite Hitchcock. I think Tippi Hedren is riveting to watch in her role as Marnie Edgar. It is disturbing to think that to produce that performance she was mistreated by Hitchcock as The Girl suggests. However, I didn’t really learn anything new from The Girl and it left me dissatisfied. Interestingly, though, it did end with a title suggesting that Marnie has now been recognised as Hitchcock’s last masterpiece. I would agree with that, but many others wouldn’t and in commercial terms films like Torn Curtain and Frenzy were probably more successful.

Although a HBO production, The Girl is essentially a UK film shot partly in South Africa, I think.

I’m now looking forward to Anthony Hopkins and Helen Mirren as Alfie and Alma in Hitchcock. I suspect it will be a different kind of film.

Here is the original screen test for Tippi Hedren that is treated rather differently in The Girl.