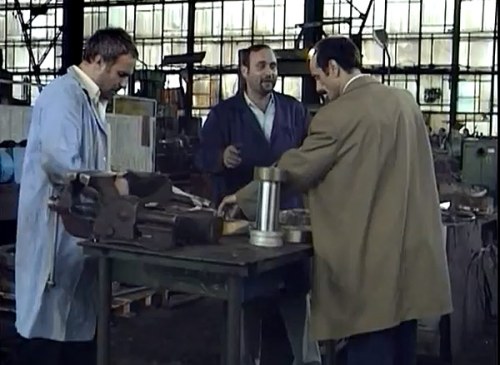 Iulica (Gabriel Spahiu) as the engineer in the coat on the factory floor with two of the machinists who he is persuading to do a little personal job for him.

For some obscure reason I seem to have missed all the major films of the Romanian New Wave, so I was pleased to get the opportunity to see this film. As far as I can make out, it isn’t typical and in fact seems to be a conscious attempt to create a contemporary version of the pre-1989 satires of East European communist states.

The plot (based around a real incident) follows a day in the life of a middle manager, a ‘comrade engineer’ in a Romanian factory. The date is precise and important: May 8th 1986, the day after Steaua Bucharest beat Barcelona in the European Cup. Our hero Iulica has videorecorded the match (in which the Steaua goalie made four saves in the penalty shootout) and hopes to show it for his boss at the factory and other colleagues after the ‘festivities’ for the 65th anniversary of the Romanian Communist Party. (The videorecorder itself being a rare and desirable object.) Iulica has a role in the festivities as well – as the producer of two films made in the factory, one a ‘health and safety’ documentary and the other an ‘artistic’ film, again about health and safety, which provides the overall title of Adalbert’s Dream. Things don’t go quite as planned.

I enjoyed the film which I thought came to life once we reached the factory and met Iulica’s boorish but entertaining boss. After a while, I realised that the tone of the film was familiar, combining elements from the Czech New Wave films of the 1960s such as Milos Forman’s The Firemen’s Ball (Czechoslovakia 1967) and also Dusan Makaveyev’s wonderful and surreal Switchboard Operator (Yugoslavia 1967). Gabriel Achim, director of Adalbert’s Dream, captures the absurdity of social relations in these particular communist societies. He does this both in the interactions of characters and in his decisions about formats. The film was shot on various video formats including S-VHS and Beta SP in Academy ratio to match the propaganda and health and safety films of the period.

I confess to a certain nostalgia in watching a film set in a factory with lathes, men with oily rags and overalls, smartly-dressed women from the office etc. By 1986 in the UK factories on this scale were disappearing – and with them aspects of working-class culture. Some of what was lost won’t be missed, including the sexism and the drudgery of some work patterns. But what the factories did provide was employment and a sense of community and belonging. The best factory systems also provided a social and cultural life for the workers and this is something that is important to recognise when watching Achim’s satire. All of those possible pluses are there but they aren’t allowed to be fulfilled because of the underlying problems associated with Romanian communism. Everything is focused on pleasing the political bosses, but because everyone’s individual desires (and beliefs) are very different – and because the system is ‘broken’ in terms of the quality of goods and services it produces – the sucking up to the party boss is doomed to failure. Achim brilliantly crystallises this analysis in his use of the Health and Safety Film, examples of which, with their bureaucratic pedantry, crop up throughout the film. I won’t spoil the film by listing all the ways in which the issue is presented – but Achim is able to end the film with a very striking sequence. I should say that several scenes are also very funny.

I’m not sure how the film will fare in the Bradford competition or how it will be read by younger audiences, but once I’d properly tuned in to the film I realised that it works very well.